Getting someone else to come around to your point of view can be a tricky thing.  Before you can ask your audience to act, you’ll need to make them aware of your point of view and convince them to consider it. It’s even tougher to change a point of view that they already have. You could take on the task directly and come armed with a list of arguments and facts. But that’s just the standard way of doing things.

Another approach is to talk around the issue, subtly shaping the decision-making landscape. Like the forestry service offering a path through the woods that fits the setting, you clear obstacles and offer the best path past hazards while still allowing the audience to draw their own conclusions. It’s more difficult to do and takes more time. But it can be a lot more effective.

When planting an idea you have to be early enough to affect your audience before they take a firm position. And you can’t come on too strong or they’ll know the idea is not their own. A long term awareness campaign requires a lot of faith and patience. But we can also take advantage of shortcuts.  An idea that comes from a single source can take quite a long time to wedge itself into consciousness. Having the idea reinforced by multiple, independent sources greatly increase that message’s effectiveness. And you get even further by getting your audience to agree with that message on their own, or at least recall your claim for a positive reason.  (Plus the act of recalling something can deliver positive benefits on its own as well.)

Getting your audience to recall your message can jumpstart your attempts at persuasion and there are several effective tools for the job. Have you ever had to remember a phone number without having a pen to write it down? If you’re like most people, you repeat it to yourself, out loud (at least if there’s nobody else around to look at you funny.) There’s something about speaking that makes it easier to remember. There has actually been quite a bit of neuroscience research on the topic – suffice to say voicing your ideas requires additional brainpower that helps with recall.

Likewise, concepts and arguments stick when you try them on for size, either in your head or on paper. Dawson Trotman, founder of The Navigators said, “thoughts disentangle themselves passing over the lips and through pencil tips.” Translating an abstract thought into coherent communication requires you to process it first.

So how can you get your audience to try out your idea without putting up conscious barriers first? As a thought exercise, let’s take a look at some potential techniques and how they might play out in a creative campaign.

1. Awareness campaign plus 3rd party ask  – Let’s say you’re a small Chicago based company in a competitive industry like organic snack food. You could run a two part campaign to cement your message of being a local favorite. In part one, you’d do a typical awareness effort like becoming a sponsor at a 5K or a summer festival in town. Give away samples and literature that describe how you’ve been connected to your city for x number or years or another unique and re-callable claim.

In step 2, follow up with the people that were exposed to your brand claim shortly after the event but do it through a 3rd party. Your goal is to trigger the memory of their initial interaction with you (and reap the benefits of that recognition) and to use a positive reward to solidify your brand positioning claim. Continuing the example of a local snack company, you could create a simple Facebook quiz run by Windy City Software that lets users answer questions about how well they know their hometown. One of the questions will be related to your claim. “Which of these companies based in Oak Park was one of the first organic snack options in Chicago?…” The user is motivated to dredge up the memory in order to get the question right and your claim is reinforced.

The rest of the quiz can be fun cover or you could band together with like minded complementary vendors who might also like to get involved.By the way Facebook has always made it easy to target advertising to a specific segment like residents of your city or neighborhood. They have also recently added an option to upload your own set of email addresses in order to create a custom advertising segment – as an event sponsor you might have access to just such a list.

2. Whitepaper and custom captcha – A lot of smart marketers are using content marketing to good effect these days. If you work in an industry where you can offer a helpful guide or intro to an unfamiliar issue, whitepapers are great ways to introduce your brand. Traditionally, content marketers will write a whitepaper and offer it for free on a webpage. In order to reduce friction and encourage as much use as possible, whitepapers are often offered without having to register or fill in a form at all.I agree with line ofthinking and believe it works out best in the end to avoid the temptation of requiring a name or email address. But even cynical consumers understand the need for short captcha tools to guard against abuse. Why not ditch the traditional captcha tools and come up with a custom one that works to your branding advantage? Ask them a simple question that makes them think, even a little bit, about your brand. “This guide to DIY photography is brought to you by the lighting pros at ______”

By requiring that they type the answer, you’ve added a measure of stickiness to your branding message.

3. Co-opt a common sound and link it to your brand claim.  – As anyone who has had a jingle stuck in their head knows, audio can make a terrific vehicle for recall. If you were a pet food company you could incorporate the whirring sound of a can being opened into your TV or radio ads about the quality of your product. By linking your claim of being a superior brand to the common sound of a can opener working, you can encourage recall every time your audience encounters that trigger.

On a similar note, you could create a useful preparedness mnemonic that doubles as a recall device. 1-800-ASK-GARY is a lawyer referral service that already seems to be everywhere these days.  During their radio ads, they could offer an acrostic for accident victims to remember what to do while at the same time encouraging brand recall.
G – Get out of the way of traffic and put on hazards
A – Authorities: call the police and, if necessary, an ambulance
R – Record information including notes about the accident and insurance info
Y – Your rights – don’t admit to guilt or sign anything and call a lawyer. 1-800-ASK-GARY is there 24/7 to answer your legal questions.

Each of these hypothetical campaigns use recall as a means of getting your message to ‘cut in line’ amid the clutter of traditional noise. What other creative ideas can you come up with for getting consumers to process ideas and boosting recall?

I recently attended the Exact Target’s Connections 2011 event, a user conference on interactive marketing. One of the takeaways from their education sessions came from the speakers – although they weren’t speaking at all.
Social proof is a tried and true tool of persuasion. We know that consumers are much more likely to listen to what their peers think than to be swayed by messages coming from brands. That is the reason why customer testimonials and product reviews are so effective for websites looking to make a sale of some kind.
Besides the overt types of social proof we see online, there are plenty of ways to convey how you feel about a company in a more subtle way. It’s been said that over half of communication is delivered non-verbally through body language. That’s unfortunate for some of the speakers I witnessed trying to present at the show.
Many of the sessions I was in featured a panel, with each speaker taking a turn at the podium while the others waited. Take a look at the view from the audience. 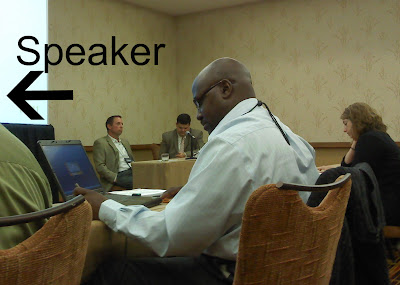 The poor speaker (who is out of the frame here) is trying to make a point that he thinks is important while sharing the floor with these guys. 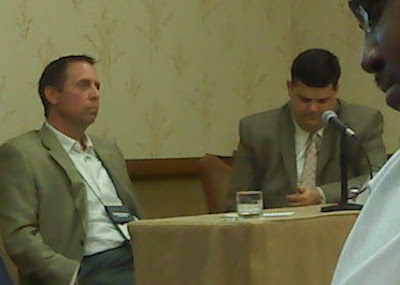 They even work for the same company! They are basically telling the room full of people listening “don’t bother tuning in at this point, there’s nothing exciting here. You might as well check your phone for new email.”
This wasn’t the only session either. I wish I would have snapped a picture of the first class of the day when the panel was still waking up. They were literally yawning on stage, totally undercutting the presenter.
The panels weren’t all this way. Contrast the scene above with this one taken a little later in the day. (Sorry for the phone picture but it’s hard to snap a photo when the speakers are actually alert.) 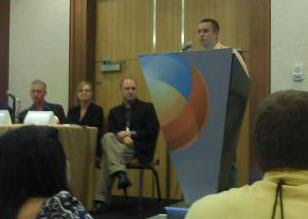 These panelists are actually giving their speaker some eye contact and following along. Much more respectful and helpful to the audience too.
Just an observation that little signals can communicate a lot to the audience, either online or offline. And a note to self – next time I’m speaking on a panel I’ll have to remember to buy some coffees for the group on stage!