It’s always fun to look at examples of successful campaigns and to learn from great persuaders.  With Easter behind us a few days I thought we could look at one of the most successful speeches of all time: Peter’s address at Pentecost.  He transformed the lives of thousands of people with one speech, amid extremely adverse conditions.  Let’s take a look at how it happened. 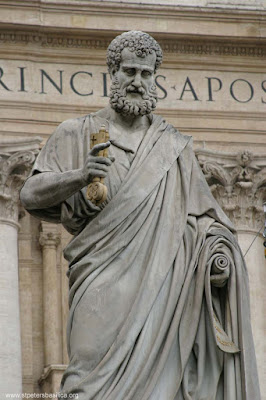 First, a little background on the environment where this event took place.  After Jesus was crucified, he rose and appeared to hundreds of people over at least a few weeks time.  But the large majority of the population thought of Jesus as simply a wise teacher and a failed Messiah.  They were probably aware of rumors of his ressurection but there was no real support of Christ as savior and there was certainly no ‘Christianity’ as a religion. In fact, Jesus himself instructed his followers to await the Holy Spirit before setting out to evangelize.


During the Feast of Weeks, Jews from dozens of countries gathered in Jerusalem to celebrate the harvest.  It was during this time that the apostles received the Holy Spirit and began speaking in tongues to the crowds.  The audience was amazed that they were hear the message in their own language.  But rather than embracing this phenomenon as proof of the Lord’s involvement, they were confused and skeptical.  Some were openly adverse to what was happening, heckling the speakers and accusing them of being drunk.  It was in this environment that Peter delivered his presentation.

Acts 2:14-36
But Peter, standing with the eleven, lifted up his voice and addressed them: “Men of Judea and all who dwell in Jerusalem, let this be known to you, and give ear to my words. For these people are not drunk, as you suppose, since it is only the third hour of the day. But this is what was uttered through the prophet Joel:

“‘And in the last days it shall be, God declares,
that I will pour out my Spirit on all flesh,
and your sons and your daughters shall prophesy,
and your young men shall see visions,
and your old men shall dream dreams;
even on my male servants and female servants
in those days I will pour out my Spirit, and they shall prophesy.
And I will show wonders in the heavens above
and signs on the earth below,
blood, and fire, and vapor of smoke;
the sun shall be turned to darkness
and the moon to blood,
before the day of the Lord comes, the great and magnificent day.
And it shall come to pass that everyone who calls upon the name of the Lord shall be saved.’

“Men of Israel, hear these words: Jesus of Nazareth, a man attested to you by God with mighty works and wonders and signs that God did through him in your midst, as you yourselves know—  this Jesus, delivered up according to the definite plan and foreknowledge of God, you crucified and killed by the hands of lawless men. God raised him up, loosing the pangs of death, because it was not possible for him to be held by it. For David says concerning him,

“‘I saw the Lord always before me,
for he is at my right hand that I may not be shaken;
therefore my heart was glad, and my tongue rejoiced;
my flesh also will dwell in hope.
For you will not abandon my soul to Hades,
or let your Holy One see corruption.
You have made known to me the paths of life;
you will make me full of gladness with your presence.’

Brothers, I may say to you with confidence about the patriarch David that he both died and was buried, and his tomb is with us to this day.  Being therefore a prophet, and knowing that God had sworn with an oath to him that he would set one of his descendants on his throne,  he foresaw and spoke about the resurrection of the Christ, that he was not abandoned to Hades, nor did his flesh see corruption. This Jesus God raised up, and of that we all are witnesses.  Being therefore exalted at the right hand of God, and having received from the Father the promise of the Holy Spirit, he has poured out this that you yourselves are seeing and hearing. For David did not ascend into the heavens, but he himself says,

“‘The Lord said to my Lord,
Sit at my right hand,
until I make your enemies your footstool.’

Let all the house of Israel therefore know for certain that God has made him both Lord and Christ, this Jesus whom you crucified.”

Entering a chaotic situation, Peter took charge by quickly connecting to the audience, establishing an authority and by challenging them with an extremely confrontational style.  By laying into his audience he ultimately won them over. 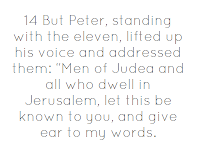 Peter starts off by addressing his crowd as Jews, both native and foreign.  Then he goes on to refer to Joel and David’s writings, both Jewish prophets that the audience would be well aware of.  In a sense he’s getting the crowd around to his side by saying ‘we’re all Jews here, let’s talk plainly.”


2. Appealing to authority
The first task for a persuasive speaker is to establish why the audience should care.  Appealing to authority, what Aristotle called out as ethos, is a classic mode of persuasion.  But since Peter lacked the recognition he needed to stand on his own credentials, he held up Jewish authorities of the past and the audience’s own experiences.  He quotes passages that concern the last days, judgement and God’s promise to send a Messiah. These are topics that men not were not only aware of but anticipated intently.  He then connects those familiar passages with current events.  The men in that generation were witnesses to Jesus’s life and ministry.  Peter is saying ‘don’t take my word for it, listen to Joel and David.  And if that’s not enough, just think about what you’ve seen with your own eyes!’

Rather than laying out a logical path for them to follow or presenting facts and letting the audience draw their own conclusions, Peter hits them over the head with their failure.  The most difficult part of creating change is pushing through simple agreement, where the audience is smiling and nodding in their seats, but won’t wind up actually doing anything.  Peter pulled it off by essentially calling his audience out.  ‘The miracles and wonders that surrounded Jesus’s ministry should have made it plain that he was sent by God.  But instead of receiving that gift, you put him to death.’  That kind of accusation would make indifference impossible.


The result of Peter’s arguments were just what he needed to create change.  The audience recognized the problem and were ashamed enough to be open to a new direction.  The last thing he had to do was to offer a tangible action that they could take right then.  This part is not as tough as all the convincing, but it’s critical to sealing the deal.  Peter is ready when they ask ‘what must we do?’  He tells them simply ‘repent and be baptized’ and ‘receive the Holy Spirit.’  He also offers the help and support they need to take that action.  With such a simple way to get started, the audience responds in a big way.


Acts 2:37 says when they heard this, they were cut to the heart. I love that line.  According to Luke’s account, over 3,000 men went from being confused skeptics that doubted Jesus’s ministry to committed believers willing to stick their necks out in front of their families and culture to follow Christ.  It’s an amazing turnaround.


The other part of that process that I’ve left out, but that can’t be overstated, is the work of the Holy Spirit in working on hearts.  No doubt Peter’s words alone would not have had the same effect.  Being obedient to the Spirit’s leading, Peter was used in a dramatic way on Pentecost and provided a great blueprint for using persuasive rhetoric in a positive way: connect with the audience, establish why they should listen, make action urgent and have a simple way to get started.